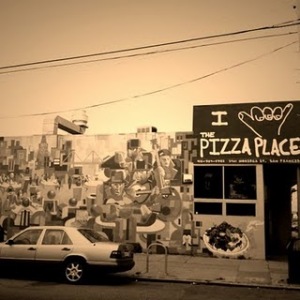 This place rocks. It wasn’t a Friday night, and wasn’t date night (how do you like that for sticking with my goal for this blog?) It was Sunday, this past, and we were with the kids. My husband found it and scoped it out earlier in the day, and then the whole family went around 6p.

It was buzzing. Filled with hip, relaxed folks – not the plaid flannels and thick black glasses of the Mission hipsters, but there were a lot of unruly beards. Mild piercings and tatts, lots of smiles and beer. A group of six sat behind us, almost all of them sporting a San Franpsycho hoodie. There was a kid at every table, but the parents didn’t look older like a lot of the San Franciscan career-focused moms and dads appear to be. Giants game rolling on two tvs.

And the food, well, the pizza was delicious. A large wheel topped with pepperoni and half with jalapenos. So tasty. I ordered the pesto pasta which, unfortunately, was lagging in flavor. Not salty enough for me, too much chunky basil, and the portion was out of control huge. Way too much. The garlic bread that came with it was great, and the dish I ordered of braised greens was good too. But really when you go there order a pizza and a pitcher of beer and you’re set.

I’m so tired of hearing that the Outer Sunset is soooo far out. I mean, it is, duh, but it is laden with a streak of cool that doesn’t get enough attention. It’s not the empty-blonde vibe of the surfers of SoCal, and it’s not the die-hard tree-hugging surfers of the Northwest (I’ve lived in both places, so I can say that.) It’s NorCalicious, as Hubs says, it’s surfing the broad waves of the Pacific on the edge of a vibrant, pulsating city of 800,000 people.